To see without being seen

With our new Twinvis passive radar, HENSOLDT has revolutionised classical radar technology. This system does not emit any signals itself, which means that it remains virtually invisible. Nevertheless it can even locate aircraft equipped with stealth technology.

Radar’s history of more than 100 years is characterised by countless innovations, many of which are from HENSOLDT. Another milestone in this series is the Twinvis passive radar system developed by HENSOLDT.

Twinvis allows an airspace to be monitored for the first time over a radius of up to 250 kilometres, without itself emitting radar signals. Mobile, and unobtrusively integrated into a small van or off-road vehicle, this radar’s possible uses are almost unlimited, ranging from air surveillance during particularly sensitive events to civil air traffic control and military applications.

Conventional radar systems all work using the same principle: they emit  signals that are reflected by an object, thus allowing the radar to visualise that object based on the echo received.

The system uses the countless radio signals which are already  in the air from broadcast and TV transmitters and evaluates their echoes when reflected by an object.

When, for example, decision makers from politics and business meet  every year at the World Economic Forum in Davos, their safety is a key issue. It is not just since 9/11 that air surveillance has played a decisive role here.

In this context, it would be possible to use a mobile Twinvis to even track small aircraft without transmitting any signals of its own. Thanks to its innovative technology, it can be installed  directly in valleys and monitor them, which was only possible with a  great deal of effort, if at all, with conventional radar systems.

And that is just one of many  applications. In addition, Twinvis could, for example, detect the aircraft of smugglers in a specific region, provide additional security  for major events in urban areas or cost-effectively supplement  conventional radars in air traffic control. As it doesn’t broadcast any signals, it can even be used without any additional official approvals.

This ‘super radar’ is made possible by the extension of the computing performance and by a speciality  of HENSOLDT: a highly sensitive, multi-channel digital receiver  technology, which makes it possible to locate radar echoes that are up to ten billion times weaker than the output signal, for as many as 25 transmitters at the same time.

In the military field, Twinvis even combines several advantages. In addition to its high mobility, the system itself remains ‘invisible’, i.e. cannot be jammed or eliminated in a targeted action. At the same time, it can also be used to discover stealth aircraft which, due to their low observable technology, have until now remained undetectable for conventional radar systems.

Stealth technology prevents an aircraft using it from reflecting any radar signals. Instead, these signals are absorbed by the surface of the aircraft. The technology developed by the USA, and first used in the Lockheed F-117A in the 1980s, is currently being used and further  developed by military aircraft  manufacturers all over the world. 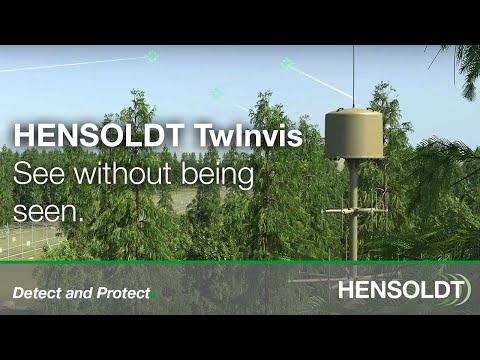 The market launch is imminent

A single Twinvis can monitor airspace over a radius of 250 kilometres. Up to 200 aircraft are visible at the same time in 3D (range and altitude). Moreover, several Twinvis can be  linked up into a networked system so as to monitor even larger areas, coasts or borders. HENSOLDT CEO Thomas Müller is very happy that “Twinvis  supplements classical radar with a new and revolutionary high-tech development. It enables completely new applications, thus opening up numerous additional market  segments for us.

At the same time, it has the potential to  circumvent stealth technology in the military arena. It was in April 2018 that HENSOLDT first presented Twinvis to the wider public, at the International Aerospace Exhibition (ILA) in Berlin, in real- time operation. There, the newly developed system was met with great interest from both civilian and military customers. Twinvis is currently being tested in daily use.