AIR:  Detection and interception of small and low-flying aircraft above canopy or above stormy sea, gathering information on direction and speed of a flying target for correlation with data from other sensors, e.g. ADS-B and EO/IR.

SEA: Detection and tracking from small to large targets in high sea states, indication of the target size, velocity and direction of the vessels as well as rapid identification of maritime vessels that do not have corresponding AIS or IFF signature.

LAND: Tracking and plotting moving objects on the ground. Objects can be identified easily and changes in the environment can be detected by comparing previously captured SAR images.

More than a thousand targets on air, land and sea can be tracked at the same time.

PrecISR™, HENSOLDT’s new family of Airborne Multi-Mission Surveillance Radars, offers high performance in a compact design. The superior performance of PrecISR™ enables airborne operators to accomplish large area surveillance in one flight pass. Even in the most difficult environmental conditions and sea states, users will take advantage of an unrivalled level of situational awareness with significant flight cost savings.

PrecISR™ translates the latest achievements in AESA technology into a low SWaP (Size, Weight and Power) high-performance and scalable radar. It has been designed for a wide range of airborne platforms: UAVs, helicopters, as well as special mission aircraft.

PrecISR™ tackles the challenges of intelligence, surveillance, and reconnaissance missions such as human and drug trafficking, piracy, illegal fishing, oil dumping, terrorism, smuggling or environmental threats. Thanks to its software-defined radar modes and electronic beam steering, PrecISR™ can perform several different tasks at the same time at air, sea and land.

HENSOLDT PrecISR airborne multi-mission surveillance radar
We embed our videos via YouTube. To watch the video, you have to accept cookies. 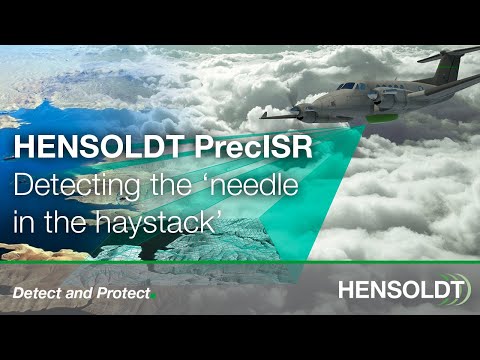